Gum Disease Pictures: What do Healthy Gums Look Like? 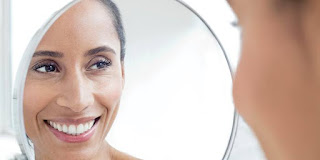 If you suspect you have gum disease and are experiencing some of its symptoms such as sore gums, it may help to compare your gums to the pictures of healthy gums and gum disease below, from gingivitis to advanced periodontitis. If your gums look like they’re in the early stages of gum disease, bring it to the attention of your dentist and hygienist at your next visit.
Gingivitis
The most common way to identify gingivitis is to look for gum inflammation and bleeding.

Early Periodontitis Pictures
During the early stages of periodontitis, symptoms include noticeably receding gum and pockets between gums and teeth.

Advanced Periodontitis
As periodontitis progresses, tissue and bone that support teeth are lost, causing loose teeth.
Healthy Gums vs. Unhealthy Gums
If you have healthy gums, they will look firm and pink. Some signs of unhealthy gums include redness and swelling, gums that bleed when you brush or floss your teeth, and gums that appear to be pulling away from the teeth. There are a few factors that can undermine healthy gums, including tobacco use, malnutrition, poor oral hygiene, and poor immunity due to more severe medical problems. Also, certain medications, including some types of antihistamines, decongestants, and painkillers, can cause dry mouth, which can promote gum disease.
It's important to remember that healthy gums aren’t just important for your oral health. Maintaining healthy gums can also be important for your overall health. Numerous research studies suggest an association between periodontitis and other more serious chronic health conditions such as diabetes and heart disease. In fact, there are now several studies that suggest an association between advanced gum disease and heart disease or stroke.
How to Get Healthy Gums Again
If you have mild gum disease (gingivitis), you can regain healthy gums by paying attention to oral hygiene. Using an anti-gingivitis toothpaste like Crest Gum Detoxify Deep Clean helps reverse early signs of gum damage and gives you clinically proven healthier gums. But serious gum disease, known as periodontitis, requires more sophisticated treatment to restore healthy gums. Your dentist may use one of these techniques to treat severe gum disease and promote healthy gums:
How to Maintain Healthy Gums
Because a healthy mouth starts at the gums, maintaining an oral health routine focused on the health of your gums in crucial to the overall health of your mouth. When you have healthy gums, your teeth are well-supported by the tissue in your gums and your chances for long-term oral health are significantly increased. If you don’t maintain healthy gums, you are more likely to have gum disease, which can progress to a number of problems with your teeth and oral health. And as we talked about above, other long-term, chronic health conditions can be associated with periodontitis, a serious form of gum disease.
In order to help keep your gums healthy, there are several easy steps you should take on a daily basis. Here is a checklist you need for healthy gums:
The above article is from crest.com
Dentist Tinley Park
North Creek Dental Care
18425 West Creek Drive • Suite I
Tinley Park, IL 60477
(708) 532-4131
Posted by Dentist Tinley Park at 07:00